The Chukar Partridge (Alectoris chukar) is a gallinaceous gamebird, related to pheasants, grouse, and quail. 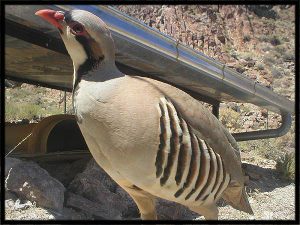 A medium sized ground dwelling bird, the Chukar weighs in at about 20 ounces and is generally 14-15 inches in length. They are not sexually dimorphic, but that males tend to be larger and more intensely colored, and many have a small “spur” on each leg. Both sexes have buff/grey backs and wings with a grey tinged cap, breast, and rump. The sides are boldly striped with slanting bands of black and chestnut against a white background. The throat and cheeks vary from white to tan, bordered with a black band extending from the top of the bill, down the neck, meeting in a conspicuous “V” where they join on the upper breast. The bill, feet and legs are red.

The Chukar is native to many areas of the Middle East and southern Asia, where they live in rocky semi-desert habitats. In the early 20th century efforts were made to introduce the Chukar into parts of North America similar to those habitats in the old world. These areas included the great basin and the mountain/river valleys of the western U.S. which were areas that historically had few, if any, gamebirds.

Chukar have come a long way since then and have a wide and varied distribution throughout the west, often living in inhospitable areas. They prefer inclined slopes with cover such as rocks, cliffs, and brush as well as lush grasses and forbs in which to dine. While not mandatory for survival, running or still water sources can be detrimental in years of drought, and higher populations generally occur in these areas.

Only a handful of chukar nests have ever been found in the wild, usually under a rock or nestled deep in some brushy cover. They lay 10-20 buff colored eggs that will hatch in about 24 days. While monogamous, the female usually incubates the eggs herself.

Chukar are fast flyers and even faster runners.

The Utah Division of Wildllife Resources has prepared a management plan for Chukar Partridge in Utah. To view this please click on the following link: Management Plan

WHAT THE UCWF IS DOING? 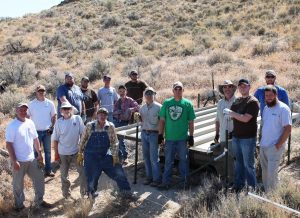 Through volunteer work and sponsored efforts, the UCWF as well as other conservation partners, have constructed dozens of these water catching devices in Utah. With your continued support, from both funding and much needed volunteer work, the Utah Chukar & Wildlife Foundation will be able to install more of these “Desert Oases” in the future. Please visit the JOIN US page for more details.

WHAT IS A GUZZLER?

A guzzler is simply a device that holds rain water for utilization by wildlife. A guzzler consists of a large water gathering platform, usually corrugated steel roofing, which is placed at a slope and used to funnel the water into a holding tank. These guzzlers are particularly useful in desert climates where surface water is scarce. 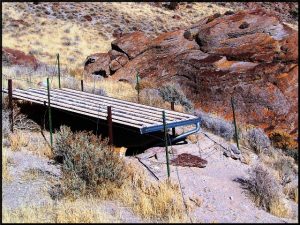 Guzzlers in Utah have been known to host dozens of species of native birds and mammals, as well as reptiles and amphibians. They can be essential to desert survival, particularly in years of drought and famine.