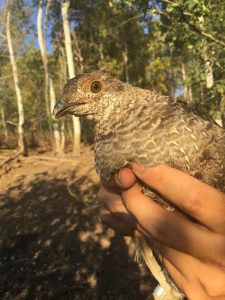 Captures – We have captured 35 grouse since July 1, 2016 bringing our project total to 70 marked (banded and/or radio). We have captured 57 dusky grouse with all 14 GPS PTT radios currently deployed and 18 with VHF radios. The rest of the dusky grouse were banded and most were juveniles too small to be radio-marked. We caught 32 female and 25 male dusky grouse. All 13 ruffed grouse were banded and released. We have been able to follow several dusky grouse broods during mid to late summer. Our project goal is to have at least 100 grouse marked, and it seems we will exceed this goal during our next field season. We have only experience a few natural mortalities this summer and survival of radio-marked birds has been high. We have experienced a few capture myopathies and have adjusted our methods accordingly.

Utilization Distribution – we have created a systematic grid of points across pastures that grouse have been using. At each point we have estimated utilization of grasses and will use this data to extrapolate a layer of the degree of utilization within our pastures. Utilization consists of both livestock and wildlife grazing and we desire to understand the impact, if any, this is having on habitat selection by dusky grouse.

GPS PTT Radios – we have had some difficulty with some of our solar powered GPS radios keeping enough charge to send location information through the satellite system. Most of these issues have occurred with males following the breeding season. We have continued to receive Doppler locations (huge location error rates) which indicates all these birds are still alive and moving, but not getting GPS fixes. This is concerning and we are checking with the manufacturer to better understand the issue. We cannot tell if the shaded nature of their habitat is causing the issue or if birds have covered part of all of the solar panel by preening their feathers, or if there is some inherent problem with the units. We hope to get this problem resolved soon. Other units have performed remarkably well and continue to provide lots of location data.

Wing Barrels – we were able to get all our wing barrels out prior to the season opener on Sept. 1. We have started collecting wings already. We appreciate the cooperation with USFS in putting these barrels on their property. We hope hunters will return any banded birds that get harvested. We also hope no one shoots a $4000 GPS PTT, but I’m sure it will happen at some point. 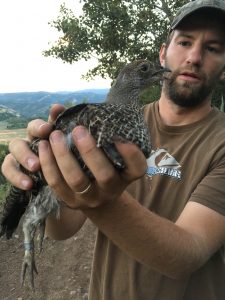 We would like to acknowledge our graduate student, Skyler Farnsworth, who has put in a Yeoman’s effort this last year to get this project up and running and as successful as it has been. We also thank the technicians who have spent countless hours working on the project: Kade Lazenby, Kyle Hawk, and Zack Slick. Stephen Lytle and Justin Brimhall have also put time into the project as technician support. 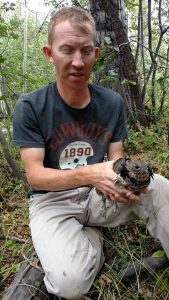 We also had the privilege of Dr. Dwayne Elmore from Oklahoma State University come and join us for a week of field work in early August. We were able to catch a few grouse with him. If you are wondering why an Oklahoma State Univ. professor would be interested in a dusky grouse project you need to understand Dwayne has a history here in Utah having completed his doctorate here at USU. Dwayne became deeply interested in dusky grouse at that time and when he learned of this research project he became involved. Dwayne is also the Bollenbach Chair (Bollenbach’s funded the position to improve and support upland game research and management) in Wildlife Biology in his department.

Here is a video of capturing a dusky grouse with a noose pole: https://youtu.be/ON2xbqn6LZk